We had a perfect plan for our last day in Rome. We’d get up kind of early, take our backpacks to the train station and stow them for the day, take a subway to the Vatican, do our tour, eat lunch, grab the subway back and hop on the train for Vicenza. Perfecto.  Not.

Our tour was scheduled at 9:30. That went well. First we toured the Vatican Museums. Not the whole museum, just a few rooms. It would take days, maybe even weeks to view the museum in its entirety. 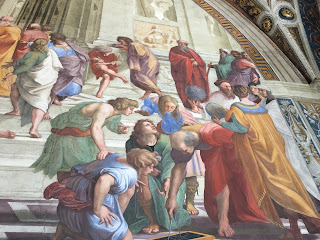 Part of a painting by Rafael. 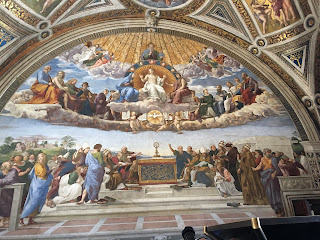 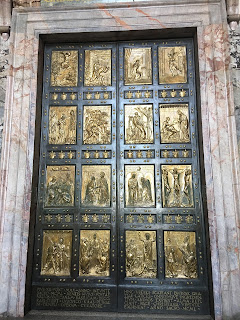 Door near the Sistine Chapel 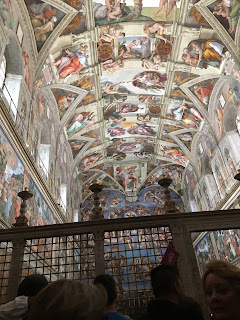 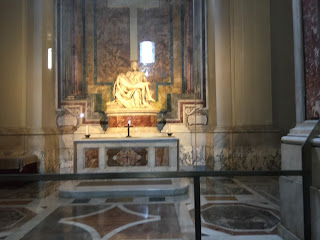 The Pieta by Michelangelo – Mary’s face appears as a young girl, about the age she was when she gave birth to Jesus. The body sizes are out of proportion too. This is symbolic (according to our guide Stephanie) as it depicts Mary holding baby Jesus but envisioning him as the suffering Savior. Paintings and sculptures had multiple meanings. Often characters in the art were given faces of actual people the artist knew. Rafael often did this and even painted himself into some of the large frescoes. 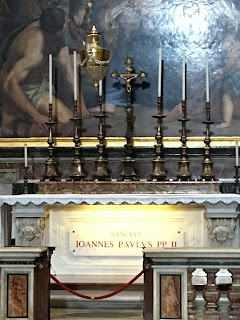 Pope John Paul is entombed here. And all the other popes beneath in the crypts below St. Peter’s. 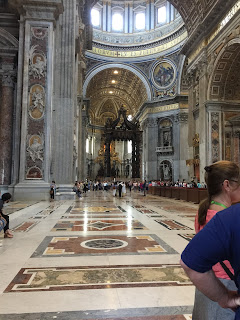 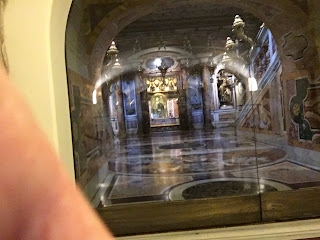 Not a very good picture but the body of Saint Peter is supposedly in here. 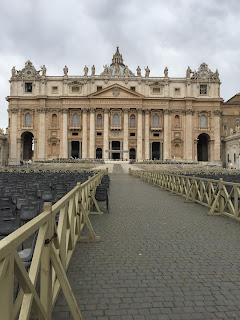 Saint Peter’s Square. This is where the Pope addresses the people sometimes. 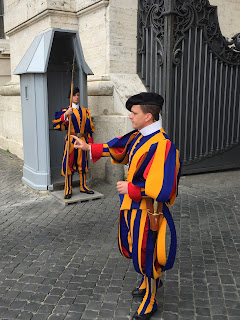 After nearly 4 hours, we said goodbye to the Vatican, made our way to a McDonald’s (I know!) to have a hamburger, and then back to the subway. UNFORTUNATELY, the subway workers had gone on strike that afternoon and the subway was closed! EEEK! Only 40 minutes until our train would leave without  us! We ran back to the Vatican cab stand. A kind Italian woman who spoke English helped us hail a cab and explain we were in a hurry to get to the train. He got us there and with a lot of running, we claimed our backpacks and made it to the train JUST as it was starting to pull out of the station. WHEW! Too much fun for old folks! Back to Vincenza and the end of our independent adventures!

One thought on “Rome – Day Three – To the Vatican and Beyond”